How to Configure Cisco Port Security

Port security is a layer two traffic control feature on Cisco Catalyst switches. It enables administrators to configure individual switch ports to allow only a specified number of source MAC addresses ingressing the port. This helps improve security by filtering traffic that is destined to or received from a specific host based on their MAC address.

By default, there is no limit to the number of MAC addresses a switch can maintain on an interface and all MAC addresses are allowed. If you want, you can change this behavior with port security. For your organization’s internal network, you do not want an employee to bring their own switch and connect to the network. That could cause outages like a SPT topology change in a case where the new switch has a lower bridge ID or a VTP VLAN overwrites if the plugged switch has a higher revision number.

Port security can also help with:

Below is a useful command to check port security configuration. You can tell that the security feature is enabled, and you can verify the source MAC address along with the VLAN (see highlighted lines). 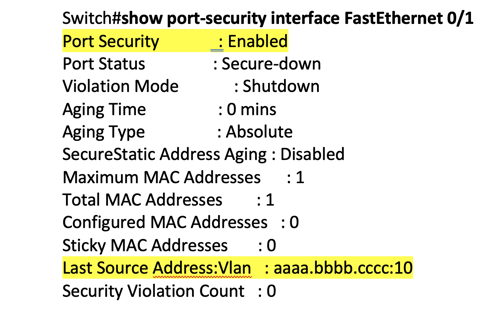 There are multiple configurations that you can set using port security. First, you can set the maximum number of MAC addresses so that once the switch detects another MAC address on the interface, it will trigger the violation that was predefined by the administrator.

Second, you can filter the MAC address (hardcoding MAC address), and when the switch once again detects that this MAC address is not what has been configured, then it will trigger a violation action.

Below is an example of a violation penalty that was triggered because of a breach in port security settings:

As we can see, the port goes into err-disable mode. We can use show port security interface command to get more details. Let’s take a close look at the output below:

You can enable the interface again after err-disable by either typing “shutdown”followed by “no shutdown” or even easier if the interface could recover automatically after a certain time (by default, 300 seconds) by using errdisable recovery cause pscure-violation.

You can decrease the waiting time and make it much faster. For example, instead of 300 seconds (about five minutes), we can set the time to 30 seconds using errdisable recovery interval 30.

Instead of manually typing the MAC address (hardcoding), you can make the switch automatically and use the first MAC address on the interface for the port security by adding the word Sticky at the end.

Here are violation predefined modes you can use:

Bilal Ibrahim is an IT professional with more than 16 years of experience in the vast area of networking technologies. His background has largely been in financial services with hands-on experience in enterprise networks specializing in Cisco LAN/WAN/backbone/data center and security environments. Bilal leads the internal network design and automation for UncommonX.

Why Network Discovery Is the Foundation of a Secure Digital Environment

Network discovery is foundational to a well-managed and secure digital environment. Unfortunately,...